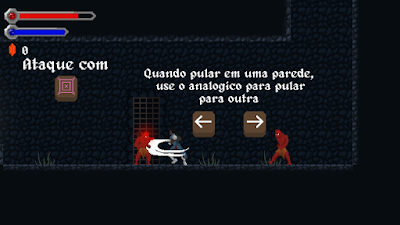 I usually only look at indie games, although it is very interesting to look at the studios as well! I do not do this as much because the studios are typically too busy making the games themselves, which makes it easier for me to go over said games! Occasionally I will come across a welcoming studio, and in this post that studio is Astral Game Studio out of Brazil! This studio, which is headed by Leonardo Lindoso,  is fueled by a long growing passion for game development shared with other team members! As indie game development studios often do, game jams were the start for Astral Game Studio, but this was not the end by any means! After months of hard work, and games like “Fix this, dude.” And “Inkreatures, the studio is working on their biggest project to date: “Asyren”. It is not easy by any means for a six person game development studio to make such great game, but they are doing a great job! If you want to get the full story I will include the interview after I sha
Post a Comment
Read more

- April 20, 2020
Not too sure what this game is yet, i'll try it tomorrow. Nevertheless, saw it on my itch feed and figured it could help you power through boredom! Wizard's Tower by McLean
Post a Comment
Read more

- April 09, 2020
Here I go again sharing another generator. This developer makes the best quality stuff in quantity as well, I have used his generators for my game and also just for fun! Winter Trees by watabou
Post a Comment
Read more

- April 09, 2020
This game jam had a fair amount of submissions, six! So, I'll include all of them here: Dungeon of the Mad Mage by rafaelcnagy, syrem The Ship on Wheels Episode One by Bozon Minotaur Maze by arthursheos Oberlon: Trading Sim by Tyler Holloway Dice 1000 online by Alexandr Shvab Medieval Times idea/research by Arcus This last one is not a game per say, but it does provide some excellent facts, research and ideas.
Post a Comment
Read more
More posts